How to Measure Aberrations

There are a few common ways that optical designers quantify aberrations. One way is to measure the distance on the image plane that a real ray differs from the ideal image point. This distance is called the “transverse ray aberration” (TRA) as seen in figure 2.1.

These methods of aberration measurement can be plotted to help with aberration analysis. The transverse ray aberration is generally plotted against normalized pupil coordinates, as shown in figure 2.2. When this is the case the plot is called a “Ray Fan”. In the ray fan below it can be seen how the points on the fan correspond to the normalized pupil coordinates and the real ray locations on the image plane (a-e) in figure 2.1.

The longitudinal ray aberration is generally plotted on the x-axis and the normalized pupil coordinate is plotted on the y-axis as seen in figure 2.3. As with the Ray Fan plot, it can easily be seen how this plot is generated by considering points c, f and g on figure 1.

In both of these cases, a perfect lens with absolutely zero aberration would result in all of the rays landing on the same point on the image plane. This would result in a straight horizontal line collinear with the x-axis in the ray fan plot and a straight vertical line located at the “0” position in the longitudinal ray aberration plot. 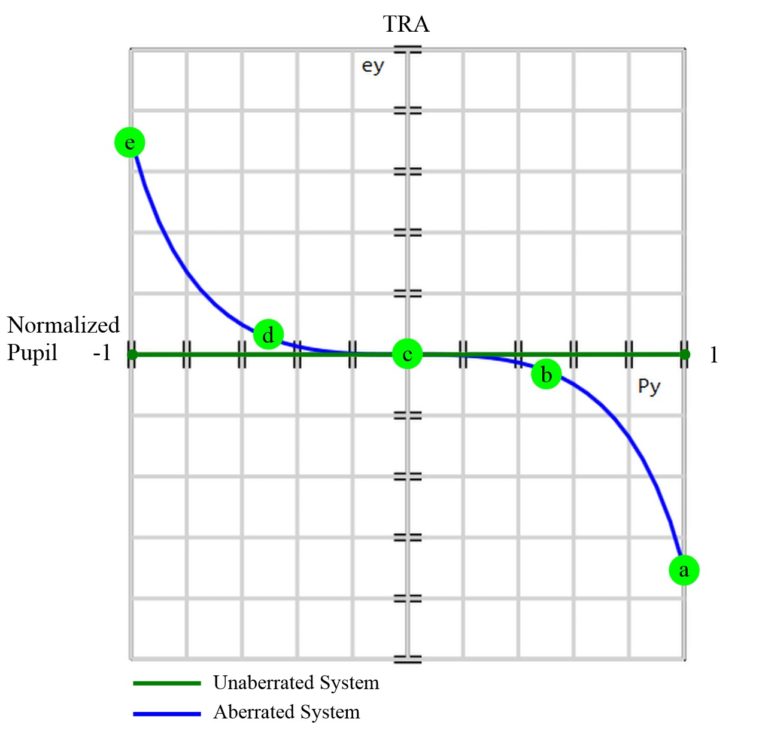 Another method of plotting is called the Spot Diagram. This plot represents rays from a point source that fill the entrance pupil in all directions and land on the image plane after going through the system. A perfect lens would produce just one point in the spot diagram since all the rays would be imaged to the same location.

Figure 2.4 represents a spot diagram. It can be seen how this diagram is generated by considering the ray locations on the image plane (a-e) in figure 1. If these ray locations are rotated about the optical axis, the image would result in a center spot with concentric rings surrounding it, which is just what we have in figure 2.4.

Figure 2.5 represents spot diagrams for different image plane locations and is called a “Through Focus Spot Diagram.” Considering the location of the paraxial image plane in figure 2.1, it can be seen that the spot generated at this image location will not have the optimal spot size. If the image plane were to be moved closer to the lens to the smallest spot size (represented as the center plot in figure 2.5) the least amount of aberration will be present.