So, you’ve completed your lens, from design to prototyping to assembly. Now comes the moment of truth. How well will it perform? There are several ways of testing lens resolution and each has its advantages and disadvantages. Accuracy, precision, efficiency, and cost will all affect which is chosen. We tend to weigh precision against speed, always trying to find that optimal balance between accuracy and efficiency. While no method offers the perfect solution, we hope our explanation of each type below helps you find the best option for your testing needs. 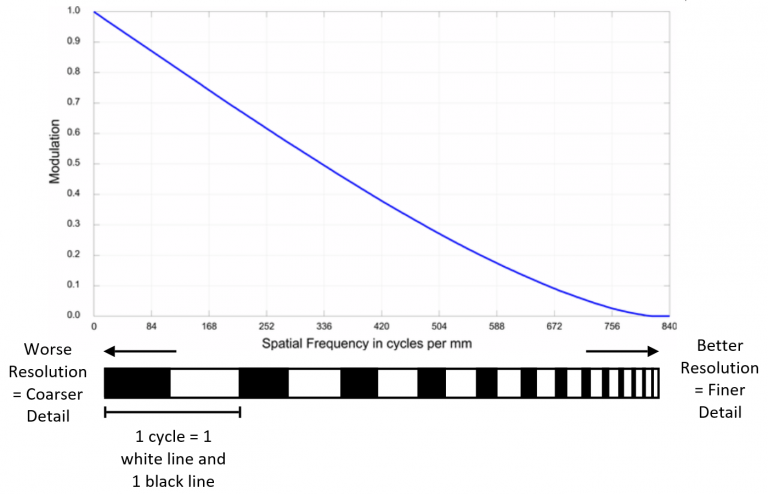 The chart has “Modulation” on the y-axis and “Spatial Frequency” on the x-axis which doesn’t sound like contrast and resolution, but actually is exactly that! Modulation is contrast normalized to a maximum value of 1. Spatial frequency is equal to 1/(2*resolution) and is often given the units of line pairs per millimeter (lp/mm). So MTF is much more than just the limiting resolution; since it inclues such complete information, it’s considered the optimal method for judging optical performance. If you are interested in learning more on MTF please visit our MTF page.

Now that you have a better understanding of MTF and resolution testing, let’s discuss the various methods used to test for each.

In a testing scenario, the lens under scrutiny is set up such that the resolution chart is at the object distance of the lens. The image of the chart is either directly viewed using an eyepiece or imaged onto a camera sensor and the limiting resolution is recorded (if you’re interested, we have a more in-depth overview of this testing method here). This method is useful because it’s simple, intuitive, and inexpensive, but it doesn’t give any quantitative indication of contrast. Also, results vary from person to person based on the subjective nature of the test. Because the human eye fails us at higher magnifications, this test is dependent on the quality of the operator’s own “lens”. Charts often used in this test are the AF1951 Resolution Target, ISO 12233 Charts (available here), Ronchi Rulings, and Siemens Star Targets.

Since reverse projection doesn’t require a high level of expertise, it’s an easy method to implement in a production environment. That, and its low cost, make it easier to use when dealing with high volumes. Once enough lenses have shown acceptable MTF, reverse projection is often used to speed up the testing process. However, reverse projection is not without drawbacks. Because it relies on the eye of the operator, the results suffer from the same disadvantages as resolution chart testing.

In a perfect world, every lens manufactured would be tested on a commercial system. They’re precise, accurate, and will test the highest limit of lens performance. These systems can either be purchased or you can pay someone who has one to do the testing for you. As stated above, these testers can be very precise, but they can be difficult for the inexperienced to use. The high price of commercial testers is the main disadvantage here, but if it’s within your budget, it’s a good option.

Other Methods for Testing MTF

If you really like reverse projection, we have good news! We have been able to modify this method by adding a digital camera on the projection side of the setup to take a high resolution image of the projected target. This image can then be run through image analysis software (ImageJ) and the contrast at different spatial frequencies can be found which allows us to get the MTF. This method has the advantage of being cost effective and straightforward. The resolution chart method can also be adapted to utilize the image analysis software to obtain the MTF.

The same Siemens Star Target used above for resolution can also be used to test MTF by using commercial software (or a free imageJ MTF plugin) to calculate the contrast at the varying spatial frequencies of the target. Since the spatial frequency varies with radius in this target, it makes calculating the MTF much simpler than on the USAF1951 target. Two different types of targets are generally used: a square-wave target and a sin wave target. The sin wave target is generally preferred, but most software can accommodate the square wave target as well. This method is inexpensive, adaptable and efficient. It also has the advantage of being able to test beyond the Nyquist frequency of the camera(0.5 lp/px).

For this technique, an image of the slanted edge (SE) target is taken. The points on the image of the SE target are projected onto a line that is normal to the slanted edge. This is then used to get the edge spread function (ESF). The derivative of the ESF is then taken to get the line spread function (LSF) and the fast Fourier transform (FFT) of the LSF is then computed to get the MTF. This sounds like a whole lot of work, but there are software packages available that will do the computation for you (and some for free! Here is a link to a free ImageJ SE_MTF plugin). Below is a screenshot of the ImageJ plugin that computes the MTF from an image of an SE target. 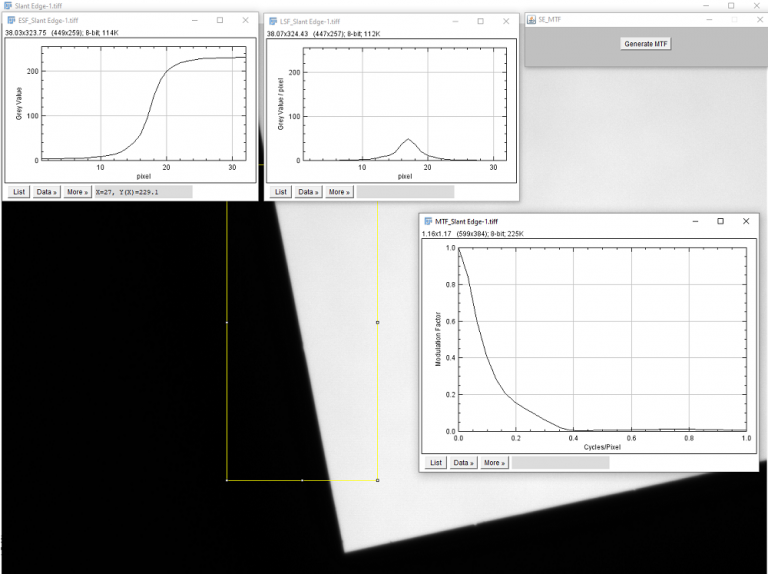 Slanted Edge MTF offers a particular advantage because it allows testing at multiple points in the image at the same time, which makes it convenient and efficient. It’s also a simpler way of getting MTF and can be applied with a camera, slanted edge (SE) target, and software. And it is also possible to measure past the Nyquist frequency of the camera because of the oversampling made possible by the slant angle of the SE target. This method is also adaptable to reverse projection, making it a versatile option for MTF testing.

There are a few downsides, however. The first major issue you might run into is the fact that the quality of the target will influence the quality of your results. Slanted Edge MTF targets often work best at either high or low magnification, while for magnifications that sit in between finding a target that is both large enough and accurate enough could be difficult. Some specific tilt angles of the target can also adversely affect the accuracy of the results, but this can be controlled by avoiding the “problem” angles.

The basic idea here is similar to other MTF methods. We point a light source (very small illuminating pinhole), instead of a target, at the object. Then we take a high-resolution image of a point source through the lens under test. This will effectively give us the point spread function (PSF). A slice in any direction through the PSF is the LSF and, as stated above, the FFT of the LSF can them be computed to get the MTF.

We’ve developed a way to test for MTF with a raspberry pi computer using this method (you can read our tutorial on setting it up here). We’ve done this by first making a point source by illuminating a small pinhole with an LED. This pinhole is them imaged by the lens and the image on the raspberry pi camera is analyzed using custom software written for the pi.

While there are many methods for determining resolution and MTF, no one method can be used universally. Really, deciding on a method comes down to finding which testing method would work best for each particular lens. Thankfully, as we’ve found, there are many ways you can modify testing methods to fit your needs. If we can help you with your project, don’t hesitate to contact us here or call us at (651)315-8249.