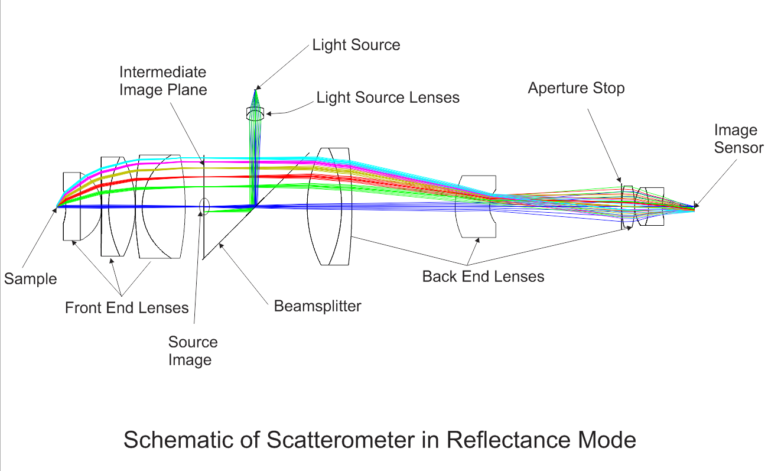 There are very few differences between this image and the picture of a conoscope lens. Only a light source and a beam splitter have been added. Let’s discuss each in turn.

Much more can be said about the light source. Let’s begin with its size and position. Ideally, the light source would be positioned on the intermediate image plane. We have experience with one conoscopic scatterometer which did exactly that. The result was that there was a black region in every image where the light source obscured the light coming back from the source. To avoid this, the light source must be located outside of the beam of light scattered from the sample. This is accomplished in our schematic by the use of the beamsplitter and the Light Source Lenses.

The Light Source Lenses collect light from the light source and create an image of the source on the intermediate image plane (see the Source Image in the picture). This image is typically larger than the light source itself because we want to collect as much light from the source as possible (requiring a low input f/#) but we also want to roughly match the f/# of the Front End Lenses so we don’t get a lot of light scattering into the lens from the area surrounding the sample. In the illustration above, the cone entering the Light Source Lenses is roughly f/2, while the exiting cone is roughly f/12. This means that the image of the light source is 6X the diameter of the source itself. The size of this image can limit the angular resolution of the system, so it is common practice to use laser sources which are only a few microns across. If white light illumination is necessary, a small LED can be used and only a small cone of light from it is collected to avoid loss of resolution.

Would measuring a BRDF or BTDF of a sample in less than a second help you get to market faster? Call us at 651-315-8249 for a consultation or use our Contact Us page to learn how our conoscopic scatterometers can help you.